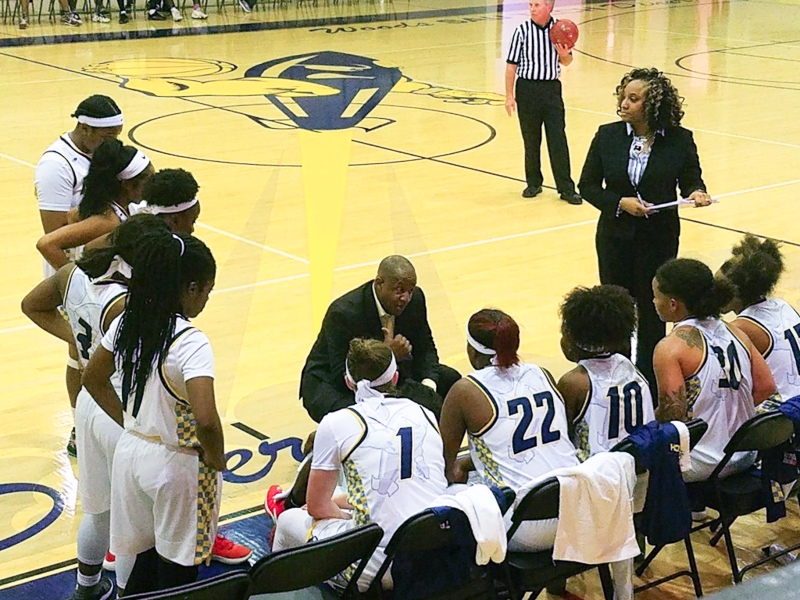 The Rockets will be sitting out the 2018-19 post-basketball season as part of the one-year probationary period required for all new entrants into NJCAA athletics. Though SAU Tech’s women’s and men’s teams, as such new entrants, are ineligible for the Region II Conference title, they are not, however, barred from receiving votes from the NJCAA Committee to appear in the D-II National Top 20 Poll.

Tech shares this situation with fellow Region 2 Conference member National Park College, from Hot Springs, AR. The National Park College Nighthawks are also new to NJCAA basketball and therefore find themselves—like the Rockets—limited to a regular-season schedule. So without an opportunity to win a conference or national championship, what are these teams playing for?

The promise of the future.

The Lady Rockets of SAU Tech began this first season with a 5-0 record—all victories over Division-I junior college competition. The Rocket men, similarly, bolted from the gate with a 4-0 start— again, over D-I schools. Then, after the Christmas break, they have gone undefeated on the 2019 side of the schedule, racking up six consecutive victories for their longest winning streak, thus far, as of this writing. Additionally, there are multiple Rocket men at the top of the Region II stats leaderboard, with Brandashia Hargraves of the women’s team, leading the entire nation in 3-point percentage.

The situation, as it currently stands, finds the Rocket men at 12-7 overall and at the top of the Region II Conference standings at 2-0. Nevertheless, North Arkansas College or ASU-MidSouth will be the conference champion. The Lady Rockets are 8-4 overall, and 1-0 in conference play—second in the Region 2 standings. The North Arkansas College Lady Pioneers have already been declared Region II champions because, aside from SAU Tech’s and NPC’s ineligibility, the fourth team in the conference, the ASU-MidSouth Lady Greyhounds, were forced by low numbers and injuries to cancel the second half of their schedule after going 0-10 before the break. That only leaves the North Arkansas College Lady Pioneers to claim the title and advance to the post-season—not that they wouldn’t have anyway, as they currently sit at number 7 in the NJCAA Top 20 national poll after finishing at number 8 last season. The Lady Rockets get their first shot at this 7th best team in the country and Region 2 Conference “champion-by-default” on Friday, Februrary 1, 2019, at home, in Shaddock Fieldhouse, at 655 Fairview Road, Camden, AR. Tip-off is scheduled for 5:00 pm.

There are only five games left for the Lady Rockets. The Rocket men have nine more and that’s it for the season. Three more home games for the women, 5 for the men. Do you really want to miss this beginning? Next season, the Rockets will be playing on campus, in East Camden, inside the College’s Student Center. Most of these outstanding players will return and the conference championship and post-season play will all be on the table. How wonderful it would be for us all to come together and “PackTheShack,”—fill up Shaddock Fieldhouse—for these players and coaches for these final home games. The dates and times for these remaining home games are as follows:

After this, what is it that the college, the community, the teams, and the fans have to look forward to?

THE PROMISE OF THE FUTURE!