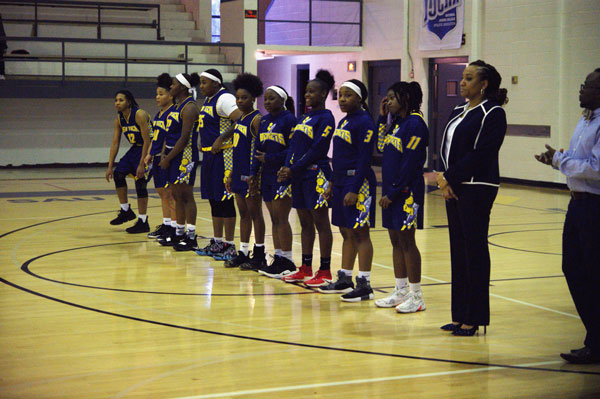 Camden, AR—Coach Andre Williams’ first-year 9-4 Lady Rockets faced their most important challenge of the season on Friday (2/1), and they ennobled themselves in the eyes of all onlookers by going toe-to-toe, for four full quarters, with the #6 team in the nation, the 17-4 North Arkansas College Lady Pioneers, falling just short of the upset, 64-58.

The North Arkansas Lady Pioneers already the league champions by virtue of default. SAU Tech and National Park are ineligible for the title in their first season of NJCAA play, and the remaining conference member, ASU-MidSouth, canceled their conference schedule due to injuries. Nevertheless, the powerful Pioneers have pounded opponents all season long, climbing as high as #5 in the national poll along the way, while playing nearly twice the number of games as Tech. It is just a fact that “saving face” enters one’s mind when that is arguably all that one has to lose.

The Lady Rockets, playing in their inaugural season, had begun 5-0 against Division-I competition, exceeding all expectations, and now had an opportunity to, not only knock off a top-ten team, but to sit atop the Region 2 standings, undefeated in league play, and in sole possession of first place, while the “champions” looked up at them from below.

Even though it could not alter the official outcome of the conference championship, there was every reason to play as if it did.

There were ominous overtones at the outset, however, as the matter of a uniform mix-up (Tech had taken their road blues to Shaddock Fieldhouse) and a slight delay in supplying information to the scorer’s table cost the Lady Rockets two technical fouls. The Lady Rockets down 2-0 even before the opening tip-off. Then the 1st quarter would reach nearly the mid-way mark before they found the bucket, scoring their first points at the 5:14 mark of the opening period. Nevertheless, the much taller and—seemingly—faster Pioneer women had only managed a meager eight points themselves by this point. Both squads had struggled with early shooting, perhaps an indication that all involved knew the magnitude of the moment and had yet to settle into it. The sputtering continued to the end of the period, and Tech only trailed by three, 15-12.

The teams gathered themselves for the second quarter and shooting improved for both sides. The Lady Rockets drew even for the first time at the 8:25 mark, and jumped ahead for their first lead less than two minutes later, with 7:04 to go before halftime. It was short-lived success, however, as the Pioneers powered back to put themselves ahead at the the half, 40-34.

The third period saw SAU Tech close the gap, tying the game again at the 9-minute mark, and slipping ahead once more with 8:20 to go. Nevertheless, less than a minute later, the Lady Pioneers had knotted it up at 43-43, and for the next 7:38 they inched forward for the four-point advantage at the end of the quarter, leading now 50-46.

The Lady Rockets would never again regain the lead, but the final stanza saw the two Region 2 teams play toe-to-toe with a determination usually associated with much higher stakes than a mere moral victory or a saving of face. NorthArk only outscored the Tech women 14-12 in the final period, but it was enough to give them the six-point win.

The #6 Lady Pioneers improved to 18-4 on the season, 2-0 in the conference. They only had two players in double-digits, with Grace Coates leading the way with 16 points. Notably, they did not sink a single 3-pointer.

Tech fell to 9-5 overall, 1-1 in the league, and 2nd-place in the Region 2 standings. Three Rockets racked-up double-digits. The nation’s leading 3-point percentage shooter, Brandashia Hargraves, did not connect from outside the arc on this night, but led her squad in scoring, nevertheless, with 17 points. Jakhiya Boston was next, with 15; followed by Haggar Caldwell, with 10.

The 64-58 victory helped to justify the Lady Pioneers’ conference-champion status, and settle them alone at the top of the league standings. For SAU Tech, it was a very tough loss, but the level of play—the determined effort to overcome early adversity, come from behind, take the lead, and stand face-to-face with a consistent contender for not just a conference title, but a national championship as well—sent a clear signal to all future opponents: The Rockets must be reckoned with.

Only 15 days from the final buzzer of this first fierce contest, the rematch is scheduled for Saturday, Feb. 16, 2019. The Lady Rockets will host a non-conference rematch with Division-I Arkansas Baptist at Shaddock Fieldhouse, on Saturday, Feb. 9. Tech got the win the first time around, 54-27.