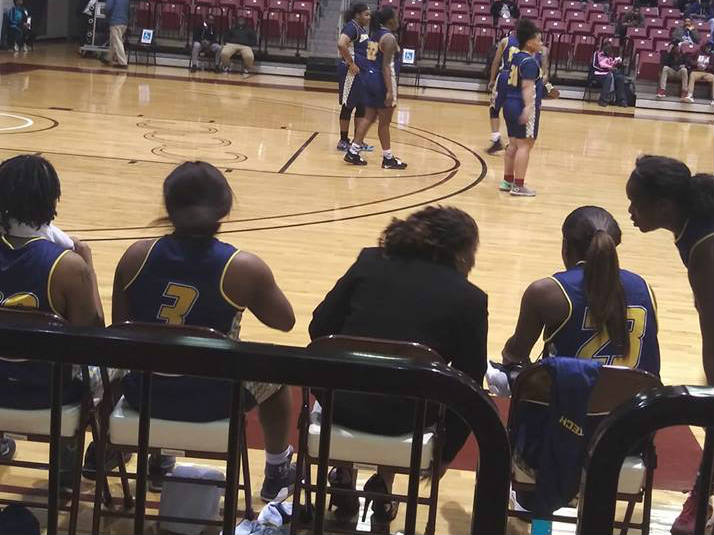 Clarksdale, MS—Coach Andre Williams’ 8-4 Lady Rockets began their final five-game stretch of the 2018-19 season by facing-off for a rematch with the Division-I Lady Tigers of Coahoma Community College on Thursday night (1/24). The Tigers had been beaten once already by SAU Tech’s women— way back on opening night (11/2), in Camden—and had had a tough go ever since, coming into the rematch with a 5-10 record. It was a hard-fought contest on the home-court hardwood of The Pinnacle, but the Rockets rose above the road-trip challenge, taming the Tigers, once more, to the tune of a 68-57 victory.

The Lady Tigers displayed an early determination not to drop another game to the Division-II Tech women, eeking-out an 18-16 lead by the end of the 1st quarter. By halftime, however, SAU Tech’s desire to secure the two-game series sweep had driven them, from behind, to forge ahead of Coahoma by 4-points, 37-33. Then it was toe-to-toe throughout the 3rd quarter, with Tech only able to tally two more points than the Tigers, inching forward for a 49-43 lead. But the Lady Rockets rallied in the 4th quarter, extending their advantage by 5 additional points, resulting in the 11-point win.

Coahoma’s women fell to 5-11 on the season, of which they finished 0-2 in their contests with Tech. In this tough second loss, the Lady Tigers recorded two players in double-digits, with Ariana Thigpen leading the way with 20. Two other Tigers managed multiple 3-pointers: Khiyee Robinson had 4, while Essence Lambert totaled 2 treys.

The Lady Rockets rose to a record of 9-4 with their 3rd consecutive victory and their 8th defeat of a Division-I opponent. A total of three Tech women tallied double-digit scoring. Jakhiya Boston was good for 12, including 2 buckets from beyond the arc. Devena Smith also sank enough for 16 points on the night. But by-and-large the team was bolstered, this night, by the above-and-beyond basketball prowess of one Brandashia Hargraves.

Brandashia entered the arena as the national leader in 3-point-percentage shooting. And her offensive skills certainly contributed considerably to the Lady Rockets’ success, hitting for three more treys and tallying a total of 21 points to lead Tech’s scoring. Nevertheless—despite this ball-to-bucket display—it was Brandashia’s defense that doomed the Lady Tigers to defeat. In an inspiring and powerful performance, she played the boards for 8 defensive rebounds, broke up attempted scoring plays with 4 big blocks, and even managed to sneak in 1 steal to seal the deal.

Coach Williams and his Lady Rockets return home, to Shaddock Fieldhouse, in Camden,AR, next Friday (2/1), for a 5 pm tip-off in what will be their biggest game of the season to date—a Region 2 Conference challenge against the #6 team in the nation, the 16-4 North Arkansas College Lady Pioneers.