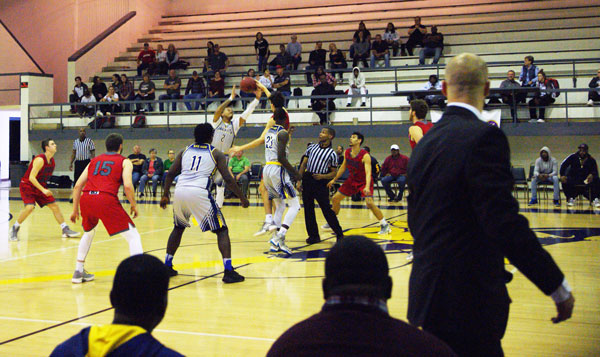 The Greyhounds have been in-and-out of the NJCAA Top Twenty all season, and still received votes to re-enter it in the latest poll. They also were 4-1 in Region 2 Conference play, which had them at the top of the league’s standings. However, that one loss came in their first contest with SAU Tech, back on February 12th, in Shaddock Fieldhouse, when the Rockets won their first-ever conference game, 87-83. It was to be the only blemish on the Greyhounds’ conference record; that is, until the second-place Rockets arrived at The Dog House in West Memphis and swept the series by defeating MidSouth for a second time, winning by the score of 71-68.

The victory ensured that SAU Tech, in its first year of competition, would finish the regular season in first place in the Region 2 Conference, despite being ineligible for the league title or post- season play, due to the mandatory one-year probationary period that all new NJCAA athletic programs must serve. Quite an accomplishment for a start-up program.

The victory was never a given, however, as was demonstrated by MidSouth taking a 30-27 lead into the locker room at the half. It remained close throughout the second half with the game being tied at 59-59 with just under 4:30 to play. But a 12-9 scoring advantage for Tech in that remaining span gave them the 3-point decision.

Remarkably, it was free-throw shooting that ultimately saved the day for the Rockets. So many of the their previous ten losses can be attributed to poor percentages at the line, but on this night, they shot nearly 78%, with perfect charity-stripe performances from Malik Miller (6-6), Mike Boatright (2- 2), and Will Bynum (2-2). The Greyhounds only found the free-throw hoop 42% of the time.

With the loss, ASU-MidSouth fell to 20-8 overall, and 4-2—and second-place—in the conference, despite having four players with double-digits and two with double-doubles. They were led by Jalen Lynn, who had another outstanding game for the Greyhounds, scoring 20 points and hitting for four 3-pointers.

Four Rockets scored in double-digits. Manny Anderson put up 19 points and secured for himself a double-double by also retrieving 10 rebounds. Miller added 15 points, while also tallying 3 steals. Sheldon Steven hit for 15, as well, 9 of them coming on his three buckets from beyond-the-arc. Boatright contributed another 11.

Tech improved to 18-10 overall, and 4-2 in league play, clinching a first-place regular-season finish in the Region 2 Conference. Next, they play their final game of the season, at home, in Shaddock Fieldhouse, Thursday (2/28), against Region 2 Conference member, National Park College. The Nighthawks are 0-5 in league play, and lost their first matchup with Tech back on January 17th, 95-88, in what is also their inaugural year of NJCAA basketball. This will be the season finale for both teams. Tip-off is set for 7 pm.