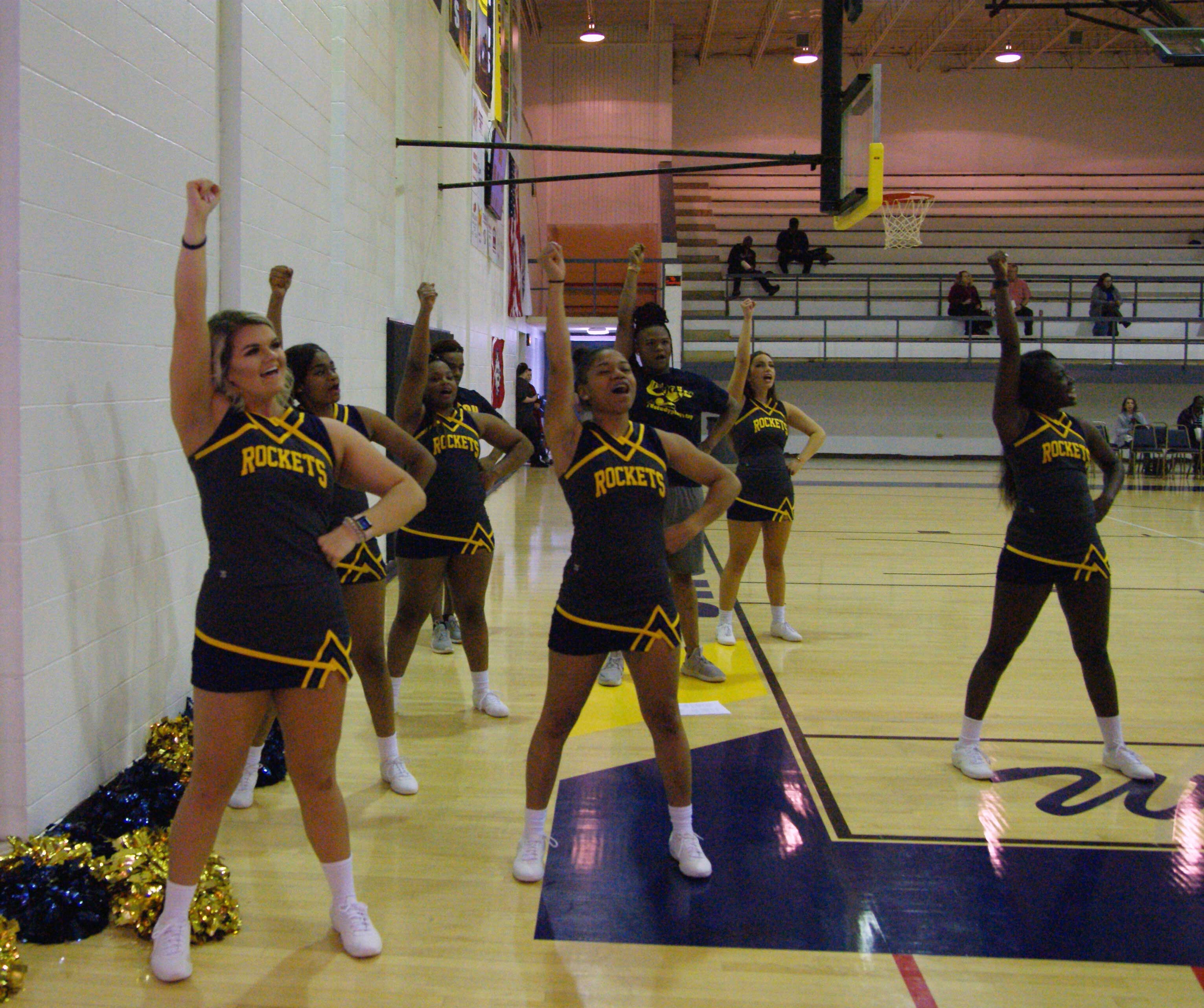 Camden, AR—In their final games of the 2018-19 basketball season, the SAU Tech women and men continued their nearly-inconceivable accomplishment—winning in their first seasons on the basketball court. On Thursday (2/28) the victories came over fellow Region 2 Conference member, National Park College from Hot Springs, AR, whom both Rockets squads had defeated in their earlier matchups back in January. This time the Lady Rockets prevailed over NPC, 79-63, and the Rocket men defeated the Nighthawks, 105-99.

This game was the final outing for the Tech teams in Shaddock Fieldhouse—they’ll be playing on campus next season—and Coach Andre Williams’ women took to the floor first, methodically managing the game against their Nighthawks counterparts, finishing the first quarter with a 16-11 lead. National Park kept it close, however, getting outscored in the second period by only a point, and at intermission, the Tech ladies only led 36-30. In the third, a 17-13 advantage inched the Rockets out a bit further to 53-43. And in the fourth ten-minute stanza, a six-point margin, 26-20, added up to the final tally and a Tech victory by sixteen points.

National Park’s women had four players with double-digits on the board, and three with multiple 3-pointers. Both categories were led by Hailee Crosby who totaled 27 points, hitting six shots from beyond-the-arc. The Lady Nighthawks were also concluding their inaugural season, doing so with a 4-14 overall record, 0-4 in Region 2 play.

Three Lady Rockets scored ten-or-more in this final game. Devena Smith’s team-leading 27 points were part of an outstanding personal performance that included a double-double comprised of 12 field goals and ten rebounds. Brandashia Hargraves was next with 20 points—12 of them coming on her four treys. Alex Parris added another 14.

Brandashia completes the regular-season as the Region 2 Conference’s top 3-Point Percentage shooter with a 50% output—that stat also landing her in the second-place position in the nation. Devena finishes as Region 2’s leader in Points-Per-Game (16.6), as well as in Field Goal Percentage (59.4%).
The Lady Rockets finish at 11-6 overall, and 2-2 in the R2C.

It was also Sophomore Night for SAU Tech, and after the women’s contest, there was a poignant pause to honor the athletes who were completing their careers as Rockets. The Ladies bid farewell to Alex Parris and Brandashia Hargraves, while the men said good-bye to Miles Weber, Jamie Hastings, and Mike Boatright.

Next, the men hit the hardwood, and the Nighthawks flew out to an early first-half lead, shocking the Shaddock Fieldhouse home crowd with a 12-0 run from the tip-off. Head Coach Marty Levinson called timeout and rallied his perhaps-rattled Rockets, and they fought back against the fierce determination of National Park, narrowing the margin, but remaining behind at the half, 49-46.

After the break, nearly seven more minutes would see NPC out front on the board, but at the 13:04 mark of the second half, the Rockets finally took the lead for the first time in the game, 67-66. It was the outstanding performances of Sheldon Steven and Manny Anderson—coming out of the locker room—that ignited the comeback, and the Tech men went on to outscore the Nighthawks 38-33 the rest of the way to secure the six-point come-from-behind victory.

National Park had four in double-digits, and three with multiple threes. K. J. Corder led the way with 27 points and three treys. The disappointing loss, in what was also their final game of the season, dropped the Nighthawks to 16-8 overall, but 0-6 in the Region 2 Conference.
The Rockets fixed five players in double-digits, and two with multiple three-pointers. Steven

Led, scoring 24 points—19 in the second half—and hit two from 3-point range. Anderson was next with 19—16 of those also in the second half. He also racked up 12 rebounds. Mike Boatright added 18 while sneaking five steals onto the stat-sheet. Will Bynum put up 13—6 of them coming on his two threes. And Malik Miller tallied 12 more to the score, also securing five steals for the defense.
At the end of the regular-season, Steven lands in first place in the Region 2 Conference standings in Points-Per-Game (19.9) and also in Total Points (517). Boatright is first in Steals (90), and Jaland Mitchell (who missed this final game, due to injury) finishes in first place in Blocks (46).

The Rockets complete the year at 19-10 overall, and 5-1 in the conference.
The season is over for Tech now, but only because the NJCAA requires new athletic participants to serve a one-year probationary period which makes them ineligible to win a conference title or to play in the post-season. How much farther might the Rockets have gone? That, of course, is speculative, but there would have been at least one more game per squad. The Lady Rockets finished 2nd in Region 2 and could have challenged NorthArk for the championship, and—amazingly—the men finished 1st in the regular-season standings and would have hosted a playoff game in the conference’s post-season.

Nevertheless, SAU Tech’s inauguration into junior college athletics can only be seen as a success. The future for the tiny East Camden, AR junior college has been foreshadowed. The Rockets have launched, and their impact upon NJCAA Division-II basketball is bound to be a thrill to behold.