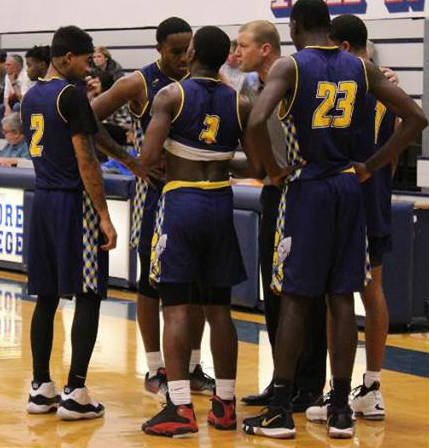 Goodman, MS—The NJCAA DIV.-II SAU-Tech Rockets men’s basketball team surged out to an unlikely 4-game winning streak against DIV.-I competition to start their very first season on the court. Now, however, they are in somewhat of a mid-season slump after losing six of their last eight games— all, but one, of those losses coming on the road, versus D-I opponents—including Saturday’s match-up with the Holmes Community College Bulldogs. No doubt, still stinging from a painful homecoming loss to Copiah-Lincoln—in overtime—Head Coach Marty Levinson and the Rocket men now had to gird themselves to go back out onto the road again, this time to face the D-I Preseason #13 team in the nation.

The Bulldogs came in with a record of 5-2, with their only two missteps being by a combined margin of a mere 10 points. They were at home in the Frank Branch Coliseum, and certainly mindful that this would be their last outing before the first regular-season poll comes out on Tues., Dec. 4. Surely, they hoped to perform well enough to not only maintain the #13 spot but to improve upon it as well.

The Rockets, though, had other ideas and set out to force the Bulldogs to earn any advantage they obtained. Initially, it was a fairly even-handed struggle for hardwood supremacy, each team making a long run against the other, and the lead bouncing back and forth between them four different times. By the end of the 1st half, however, the Tech men trailed by ten, 46-36. The 2nd half saw the Bulldogs begin to pull away, and by the final buzzer, the Rockets had lost even more ground on the scoreboard, losing by 21 points to Holmes, 87-66, and upping the Bulldogs’ record to 6-2 on the season.

Holmes had four men to score in the double-digits, with Kassim Nicholson on top with 16. Jaylen Lester also sank two 3-pointers for the Bulldogs. As a team, they snapped up 43 rebounds, had 17 assists, and committed 21 turnovers. Tech recorded three players in the double-digit category. Jaland Mitchell led the way with 26 points—9 of which came on his three field goals from beyond the 3-point arc. Sheldon Steven added 18 more on the strength of his four 3-pointers. And Immanuel Anderson logged 12 points as well.

The Rockets finished with 31 rebounds, 9 assists, and 22 turnovers on the evening. It was the SAU Tech men’s fourth consecutive loss, dropping them to .500 with a 6-6 record, with still five more contests scheduled with Division-I teams before play begins in their own classification this January 2019. Coach Levinson and all Rockets fans are looking for the team to reap the rewards of a ruthless early schedule. Meanwhile, however, it’s back into the breach, as they travel to Shreveport, LA for a re-match with Southern University-Shreveport, Sat., Dec. 8. Tech defeated the Jaguars earlier this season by the score of 90-85, and another close game is expected.