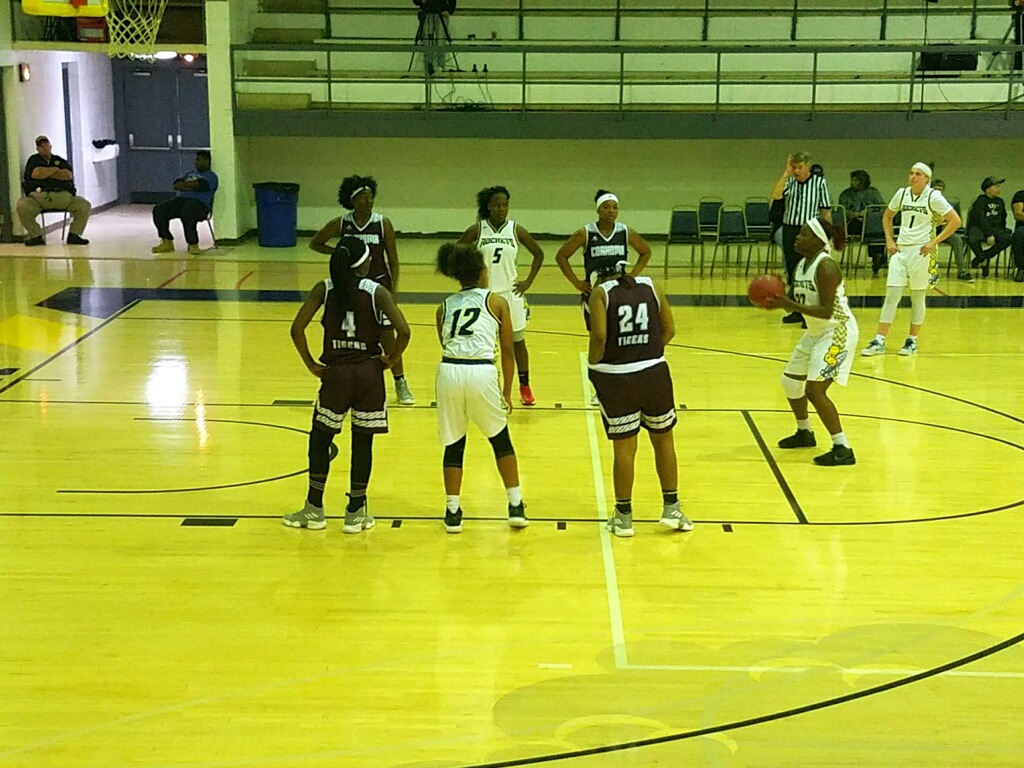 The Lady Rockets of SAU Tech ended their 3-game skid Saturday afternoon in the Health & Physical Education Complex against the Southern University Shreveport Lady Jaguars, bouncing back in a big way by the score of 85-58. The Lady Rockets improved their record to 6-3 on the season, while Shreveport continued winless on the year, falling to 0-9.

This was the second meeting of the two teams, as the Division-I Jaguars had already visited the Rockets, back on Nov.3, for the SAU Tech Tip-Off Classic inside Shaddock Fieldhouse where the D-II Lady Rockets prevailed by 9 points to pick up their second victory in what would grow to be a 5-0 start in this, their first year on the court for the first female NJCAA basketball team for SAU Tech. The return game at Shreveport turned out to be even more satisfying as Coach Andre Williams’ Lady Rockets turned it up to outpace the Jaguars by a margin of 27.

The game remained fairly close for a half, with Tech leading by 9 at the end of the 1st quarter, 26-17, but only by 7 at halftime, 41-34. Then Devina Smith’s 15-point 3rd quarter, combined with Jakhiya Boston’s and Haggar Caldwell’s barrage of 3-pointers put the Rockets up by 17 at the end of the 3rd, 64-47, before stretching the lead for the final tally. SAU Tech had four players in double-digits, with Jakhiya racking up 26 total points on the strength of her five 3-pointers for a very impressive performance. Devina, Haggar (three 3-pointers), and Alex Parris (two 3-pointers) scored 15 each as well.

The Lady Jaguars had three players in double-digits, with Sha’Tera Batton on top with 20 points. She also hit on two 3-point attempts.

This will conclude the 2018 portion of the Lady Rockets’ 2018-19 season, as they do not play again until Jan. 7 when they travel to Wesson, MS for the return game against the Division-I Copiah Lincoln Lady Wolves. The 8-1 Wolfpack took the Lady Rockets to task in the Shaddock back on Nov. 29, going on a 103-77 tear that the Rockets would love to avenge as they start the second half of the season and prepare for their important Region II Conference play which commences in January as well. Only then will the Lady Rockets face, for the first time, teams from their own Division-II classification. Thus far, all of their losses—and, more importantly, their victories—have come in competition with Division-I opponents. The idea is that when Region II play arrives, the Rockets will be ready.