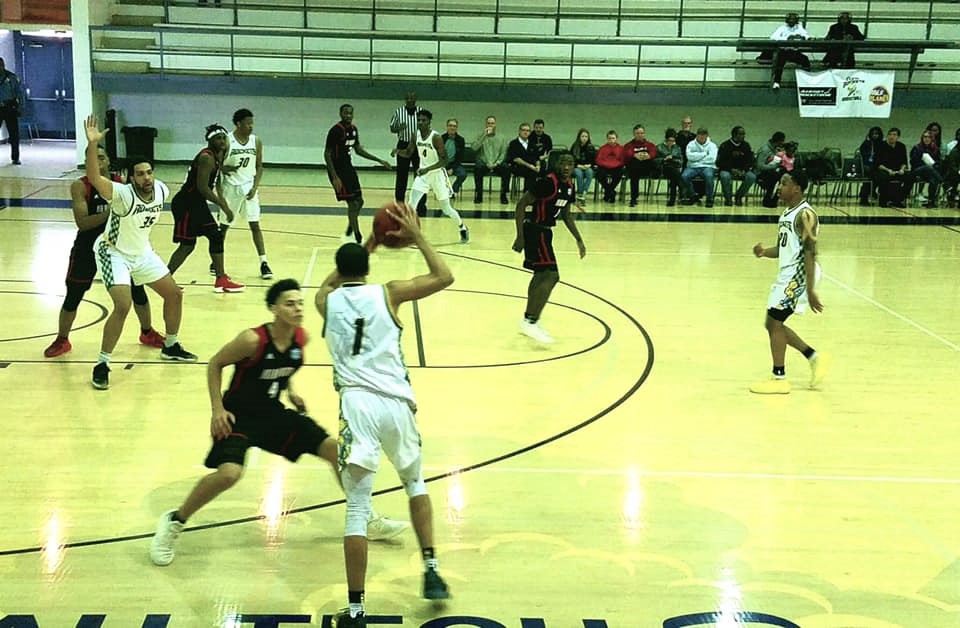 Following a 71-63  win,  on  Thurs.,  1/10,  on  the  road,  against  the  Division-I  Arkansas  Baptist College Buffaloes, the SAU Tech Rockets finally got to play in their own division as Region 2 Conference play began on Saturday when the Rocket Men hosted the 10-3 ASU-MidSouth Greyhounds, who have, for consecutive weeks, received votes in the national Top 20 poll; they are currently the first team outside the rankings–essentially #21–so the Rockets faced an important challenge right away, and— despite having another huge lead dwindle down the stretch—prevailed, nevertheless, for their fourth consecutive victory since the Christmas break, defeating  the  highly-touted  Greyhounds,  87-83,  improving to 11-7 overall, and—more importantly—1-0 in Region 2, to lead the current standings in the conference.

The Greyhounds controlled the tip and the tempo for the first few minutes of the opening half, but Tech tamped down MidSouth’s early energy and took a 10-point lead into the locker room at intermission with the tally fixed at 53-43.

The second stanza saw the Rockets soar for the first six minutes, stretching their advantage to 18 points by the 14:06 mark of the half. MidSouth regrouped, however, and reigned-in the Rockets for the final eight-minutes until it was once again anybody’s game by the end. With under a minute to go, however, the Greyhounds were reduced to relying on the intentional foul, and the Rockets racked up enough free-throws to come away with the 4-point win.

ASU-MidSouth recorded five players in double-digit scoring, with Ike Moore on top of the list with

The Rockets also racked up five in the double-digit category. Sheldon Steven continued to add to his Region 2 Points Leader stats, leading the way for Tech with 22. Will Bynum was next with 14, followed by Jaland Mitchell (12), and Malik Miller and Immanuel Anderson (11 apiece). Steven also lit it up from  long range, sinking six from beyond the arc.

The Lady Rockets also notched another win, back on Thurs., Jan. 10, improving to 7-4, knocking off the Lady Buffaloes of Arkansas Baptist College, 54-27. The 0-10 MidSouth Women’s team, however, have canceled the remainder of their season, so the Lady Rockets will have to wait till Thurs., 1/17 to begin Region 2 play in Hot Springs vs. the National Park College Lady Nighthawks.

Region 2 of the NJCAA is comprised of all the junior colleges in Oklahoma and Arkansas, however, on the Division-II level there are no junior college basketball teams in Oklahoma; therefore, only these four Arkansas schools will play for the Div.-II Region 2 title: